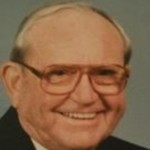 He graduated from Ursinus College, Collegeville PA in 1946 with a BS in Pre-Dental.

He received his D.D.S. From Temple University School of Dentistry, Philadelphia, PA in 1948.

He was a member of Delta Sigma Delta Dental Fraternity, member of the Indiana State Dental Association and a member of Rotary of New Castle where he served as President.

He worked with Henry County Conservancy District, where he served as Treasurer and was a member of Westwood Country Club. He was a lifetime member of First Christian Church-Disciples of Christ.

He was the 1942 Captain of the Middletown Cossacks Basketball team and a member of Ursinus College basketball team.

Memorials may be made to Henry County Community Foundation.

Click here to make a contribution in memory of Dr. Paul Max Sherman.