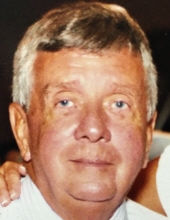 Dick loved the Lord and was a faithful and active member of the Holy Trinity Lutheran Church, having served on many committees.

Dick proudly owned and operated Myers Furniture and Appliances for more than 60 years. He first joined his father, Mark Myers, in 1956 in the family business and later proudly worked alongside his grandson, Jason Armstrong.

He loved his family and showed it every day with his encouragement and support. He loved spending time with family, including attending and supporting the athletic events or activities of his wife, children, and grandchildren. He also enjoyed traveling, golf, and going on golf trips.

Dick was a selfless community activist, and raised funds for many Henry County organizations such as the New Castle First Aid Unit, and the New Castle Band Boosters. He worked tirelessly at the Henry County Community Foundation and led the grants committee for many years.

He was an active member and leader in the United Ostomy Association having traveled across the United States and internationally to lead educational and fundraising efforts.

He was a board member at Citizens State Bank and belonged to many organizations including the YMCA, the Rotary Club and the New Castle Elks.

Dick was also an avid supporter of New Castle Trojan athletics, including New Castle basketball, volleyball and the recent resurgence of New Castle football with his grandson, Coach Kyle York, at the helm.

Dick was preceded in death by his parents, Mark and LaRue Myers.

Memorial contributions may be made to the Henry County Community Foundation to Dick’s donor advised fund, or to the Holy Trinity Lutheran Church.

The funeral service will be Wednesday, November 15, 2017 at 10:00 am at the Holy Trinity Lutheran Church with Pastor Matthew Masko officiating.

Online condolences may be made to www.macerhall.com

Macer-Hall funeral directors are honored to serve the Myers family.