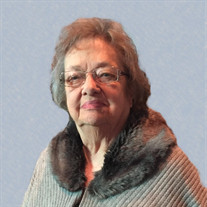 Leacher M. Carter, 81, of New Castle, passed away Friday, October 20, 2017 at Heritage House in New Castle. She was born July 4, 1936 in Monticello, Kentucky a daughter of Herbie and Ethel (Owens) Upchurch.

Leacher retired from the Henry County Assessors office after 22 years of service. She was co-owner of all-4-Kids shop in New Castle. She was a member of Memorial Wesleyan Church and was previously a member of Spiceland Church of the Nazarene for 40 years. Leacher enjoyed cooking, having company, serving and entertaining. She was a natural care-giver to her husband, children and grandchildren.

In addition to her parents, she was preceded in death by her husband, Russell Carter; grandson, Joseph Russell Bimber; son-in-law, Chuck Lovell; and brother, Kay Upchurch.

A Celebration of Life service will be at 11:00 AM Wednesday, October 25, 2017 at Hinsey-Brown Funeral Service in New Castle with Pastor Paul Kirk and Rev. Jack Bimber officiating. Burial will follow in South Mound Cemetery, West Lawn Addition. Visitation will be from 4-8 PM Tuesday. Memorial contributions may be sent to the Joseph Bimber Scholarship Fund, c/o Henry County Community Foundation, PO Box 6006, New Castle, IN 47362. Condolences and memories of Leacher may be shared at www.hinsey-brown.com.