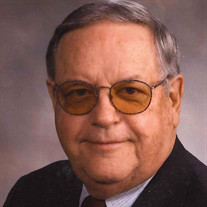 Ray Morris Edwards passed away July 23, 2018. He was born March 21, 1934 in Indianapolis, but lived his entire life in New Castle. He was the son of H. Ray and Susan Morris Edwards. He lived his pre-college years in the home of his uncle, John H. Morris, at 425 S. Main with his parents and sister, Mary Lee Pfenninger Buschmann. He was fortunate to grow up in a unique situation where he had two father figures as well as his mother. His father and his uncle were so different which afforded Morris a wealth of opportunities. His father was an avid hunter, trader, and trap shooter so Morris began trap shooting at the age of six and went on to become one of the best junior trap shooter in Indiana.

Morris’ Uncle John was a circuit court judge. Following his mother’s death when he was 18, Morris traveled with his uncle. Their traveling led to a vast array of experiences.

When he was a junior in high school, he met his future wife, the former Shirley Ann Carpenter. They were married on September 4, 1954.

He was a 1952 graduate of New Castle High School. With the support of his father, he focused on his favorite sport, golf. He played golf on the only New Castle High School team to win the North Central conference in 1949. He was the fifth man on the team. His game improved each year, and he went on to play the Indiana University Varsity Golf Team the first year he attended the University. He grew up playing golf at America Legion and then played golf at Westwood Country Club following college. His love of golf continued throughout his life and he won the Westwood Country Club golf championship six times. He went on to play in the state amateur golf tournament 14 times. He also served several years on the Indiana Golf Association Board of Directors. He admitted that he enjoyed every minute of it.

Morris graduated from Indiana University in 1956 with a Bachelor of Science degree in finance. He was member of Beta Theta Pi Fraternity.

After college, he returned to New Castle with his wife and entered the jewelry business with his father in 1956. He owned and operated Edwards Jewelry Store until 1995. He became involved in the community through his jewelry store business.

He was very active in the New Castle Area Chamber of Commerce and served in a number of leadership roles in addition to being named the chamber’s Citizen of the year in 1970. He was president of the New Castle Improvement Group and was the co-chairperson downtown mall project for one year.

Named a member of the board of directors of First National Bank in 1964, he continued to serve on the board until the bank was sold to Bank One in 1985. He then joined the board of Bank one and served until 1996.

Morris’ also served the community in other ways. He was a member of First Presbyterian Church, the Elks Lodge, the Rotary Club of New Castle, the Masonic Lodge, Scottish Rite, and the Shrine Club. He and his wife set up a scholarship fund for the Henry County Saddle Club.
Probably his most significant contribution as a volunteer in New Castle and Henry County was his over 45 year’s involvement in the New Castle Foundation and the current Henry County Community Foundation, Inc.

Morris had been active in the latter organization since inception in 1985. He served the organization as president three times and chaired the Finance and Long-Range Planning Committee. He served four three-year terms on the board of directors. He continued to serve as a director emeritus and remained active in the foundation until his death.

His involvement and leadership was a driving force in the growth of the foundation. He established endowed foundation funds in the memory of his parents and his wife’s parents as well as other family members. He actively assisted other families in doing the same thing with their financial planning. In his over 45 years of service, he not only donated a generous amount to the foundation, but also planted the seeds to develop what has become a $30 million-dollar foundation.

In 2014, Edwards was awarded the Henry County Community Foundation’s Judy Melton Award. The award was created to recognize those who go above and the call of duty in raising funds and promoting the Foundation.

He was awarded the Sagamore of the Wabash by then Governor Joe Kernan after being nominated by Herb Bunch. “Sagamore” was used by American Indian tribes of the northeastern United States to describe a great man among the tribe to whom the true chief would look for wisdom and advice. Morris Edwards had the quality as a leader.

In addition to his parents, he was preceded in death by his wife, Shirley C. Edwards in 2016.

The family wishes to thank Glen Oaks Healthcare nurses and aides for their compassion and will be forever grateful.

Arrangements have been entrusted to Hinsey-Brown Funeral Service in New Castle.

There will be no public visitation or services. Burial at South Mound Cemetery will be private for immediate family at a later date. You may express condolences or share a memory of Morris at www.hinsey-brown.com.