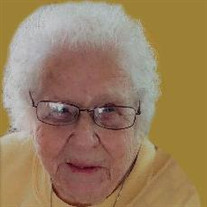 She was an active member of New Castle First Church of Nazarene where she taught Sunday school and was a member of the JOY Club. She also received the Distinguished Service award and was voted “mother of the year”. Lola was a longtime member of the Foster Grandparent Program and Head Start, where she received numerous awards and certificates. She was lovingly known as “grandma” to many.

A celebration of life will be at 11:00 A.M. on Friday, October 19, 2018 at First Church of the Nazarene in New Castle with Pastors Danny Goddard and James Nichols officiating. Burial will follow in Green Hills Memory Gardens. Visitation will be from 4 to 8 P.M. Thursday, October 18th at the Hinsey-Brown Funeral Service in New Castle. Memorial contributions may be sent to Henry County Community Foundation, Cancer Society, PO Box 6006, New Castle, IN 47362 or for Head Start c/o Kim Reeves through Hinsey-Brown Funeral Service, 3406 S. Memorial Dr., New Castle, IN 47362. You may express condolences or share a memory of Lola at www.hinsey-brown.com.