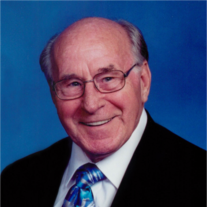 James P. “Jim” Berfanger, 87, of New Castle, went home to be with the Lord early on the morning of Thursday, December 19, 2019 at Stonebrooke Rehabilitation Center in New Castle.

He was born on February 18, 1932 at home in Indianapolis, Indiana, a son of the late, John J. and Dorothy C. (Mosier) Berfanger.

Jim graduated from Ben Davis High School in 1950. He married the love of his life, Shirley Hicks, on August 30, 1957. Jim was employed by Lake Central Airlines in Indianapolis from 1950 – 1963, Shumate Business Forms in Lebanon from 1963 – 1969. Jim joined Ford Motor Co. – Visteon in Connersville where he worked as a systems analyst until his retirement on January 1, 1995. Following retirement, he worked part-time at H&R Block and Jackson-Hewitt in New Castle and MEG Corporation in Cambridge City.

He participated in many seminars dealing with Accounting, Income Taxes, Sales Taxes, Data Processing and Computer Systems and Programming. He was awarded a “Certificate in Data Processing” by the Data Processing Management Association in 1965.

Jim was an active member of Cross Road Church and was ordained as a minister of the Holy Gospel by two local churches. In his spare time, Jim enjoyed woodworking, furniture reupholstering, and serving as Treasurer of the Wildwood Condo Owners Association.

At the request of the family, memorial contributions may be made to the Henry County Community Foundation for the Choose Henry Flex Fund.

You may offer the family a personal condolence at www.sprolesfamilycares.com.

The Sproles family and staff are honored to serve the family of James P. “Jim” Berfanger.