Fighting Cancer for 37 Years on the Homefront for Others 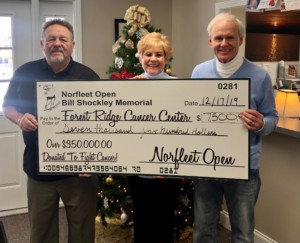 Above: Kenny Norfleet, creator of the Norfleet Open Cancer Fund and tournament; Beverly Matthews, president of the Henry County Community Foundation and Steve Graddy, who was an event sponsor in helping raise funds this year to fight cancer.

Supporters and sponsors of the golf tournament have been providing funds for 37 years to benefit citizens in East Central Indiana to provide cancer services close to home. This year team members stopped by the Foundation office to add $7,500 to build their Fund and extend their reach to help others.

“Kenny, his friends and patrons are helping keep cancer treatment up-to-date and technicians trained at Forest Ridge so travel won’t be a burden to those already fighting the disease,” said Beverly Matthews, president of HCCF. “Donations to the Norfleet Open Cancer Fund can be made at www.henrycountycf.org or sent to HCCF, P.O. Box 6006, New Castle, IN 47362.”