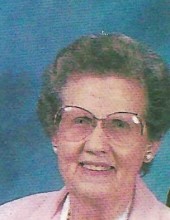 Nadine Virginia Kirkpatrick, a longtime resident of New Castle, passed away on Friday, October 23.2020 at her home in Raintree Square. She was born March 4,1921 in Huntingburg, Indiana to Robert and Pearl Thacker.

After her retirement from New Castle Schools she became Director of the New Castle Henry County Chamber of Commerce for four years where she started The Visitor’s Bureau, The Ambassador’s Club, and The Leadership Academy.

She received the Danielson Humanitarian Award as well as The Legendary Raintree County Service Award and the New Castle Chamber of Commerce Women’s Division Woman of the Year.

The family would like to thank the Raintree Square staff for their amazing love and care of our mother, as well as Henry County Hospice for helping her through her final hours.

Due to the Covid 19 Virus mask will be mandatory and social distancing will be practiced.
Arrangements by Macer-Hall Marcum & Moffitt Funeral Home. Online condolences may be expressed at www.MacerHall.com Directors and staff are honored to serve the family of Mrs. Kirkpatrick.