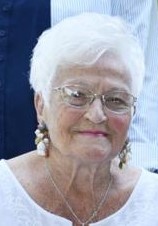 Helen Iacuone Fuller passed away December 7, 2020 after a few months of declining health. She was the daughter of Joseph Iacuone and Mariangiolina Lanza who immigrated to the U.S. from the village of Tocco Causaria in the Abruzzo Region of Italy.

A 1941 graduate of Richmond High School, she started work at National Automatic Tool Company of Richmond. She married Jesse Gayle Fuller, also of Richmond, in 1943 prior to his departure to Europe where he served in WWII as a P-51 Fighter Pilot. During the war she worked at L.S. Ayres in Indianapolis in retail sales and as a model. After the end of the war and Gayle’s military service completed, they moved to New Castle where she resided for over 70 years. She was well known in the community having been a Welcome Wagon hostess and then a regional manager. In those capacities, she met hundreds of families who moved to New Castle in the 1950s & ‘60s as she welcomed them to the community. Through the years she worked in retail at McCormick-Hammer, was the secretary for both St. Anne’s parish and the New Castle Police Department, and later sold real estate. She was an avid golfer in her younger days at Westwood CC, and throughout her life was a master quilter and avid bridge player – she enjoyed both hobbies until the last months of her life.

Helen was a long-time member of Psi Iota Xi, Altrusa, Agenda Club, the Elks Club and she was an active member of St. Anne’s parish for over 70 years where she volunteered on numerous committees, served on parish council, and in later years energized the St. Anne Quilting/Sewing group. Anyone who met her knew that her zest for life was unmatched; she travelled to Europe where she visited her parent’s village, and frequently to California, Florida, Alabama or wherever she could find a sunny beach. Her children and grandchildren never tired of her Italian cooking which was the highlight of any family gathering. As she often said, she just enjoyed watching the parade of life which she found endlessly entertaining. Even with the onset of illness, she never gave up her desire to stay around for a few more passing parades. Her family and friends will greatly miss her vitality, her joy for life, her boundless curiosity, and her youthful optimism.

In addition to her parents and husband she was predeceased by her brother James Iacuone and sisters, Viola Dickinson and Ida Shields.

She is survived by her children, Victoria Knaack, Robert (Deborah) Fuller, Joseph (Kay) Fuller, William (Jeanne) Fuller; 11 grandchildren; 20 great-grandchildren; and 10 nieces and nephews all of whom were embraced by her unconditional love for them.

Arrangements are being handled by Macer-Hall Funeral Home. Services will be conducted on Saturday, 12:00 noon, December 12 at St. Anne Catholic Church. Visitation will be from 10:30am – 12 noon, with a private family mass and burial to follow at St. Anne Cemetery. In lieu of flowers, donations may be made in her memory to the Art Association of Henry Country or to the Henry County Community Foundation. Due to Covid-19 restrictions and guidelines, the family respectfully requests masks be worn during the visitation and social distancing be followed. On-line condolences may be made at www.macerhall.com. Funeral directors and staff are honored to serve the Fuller family.