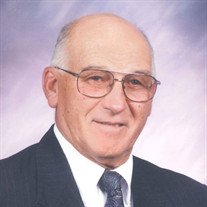 He graduated from Lincoln High School, the Wampus Cats, in Cambridge City, IN in 1953, and attended New Mexico Western State in Silver City, New Mexico. Calvin graduated from Earlham College in 1957 while being a 3-sport athlete, and is a member of the Earlham College Hall of Fame for his achievements in multiple sports. He married his high school sweetheart, Donna Jean Close in 1955 and received his Master’s Degree from Ball State University in 1965. He was a teacher and coach at Lincoln High School for 15 years before moving to New Castle Chrysler High School for the next 25 years to teach Health and Science and coach football, track and field and wrestling. He was a member of First United Methodist Church in New Castle for over 36 years.

In addition, Calvin spent his summers employed by Magiera Farms in Straughn, IN. In his retirement, he enjoyed volunteering at the Indiana Basketball Hall of Fame in New Castle, Habitat for Humanity and Meals on Wheels. He also enjoyed attending sporting events, fishing, woodworking in the garage, working in the yard, and especially time with family and friends.

He was preceded in death by his parents, Leonard and Allie (Byrd) Duff; three sisters, Evelyn Cardwell, Frances Henry and Martha Tripp, and daughter-in-law, Shanna Duff.

Visitation will be from 4-8 p.m., Thursday, January 28, 2021 at Hinsey-Brown Funeral Service in New Castle. Memorial and graveside services will be held privately. Burial will be in South Mound Cemetery. Due to the Governor’s mandate, face coverings are required as well as social distancing.