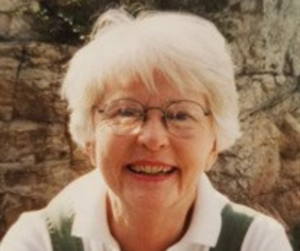 Joan M. (McShirley) Davis passed away on December 29, 2020 at Clear Vista Health Campus. She was born the fourth child of Silvia and Herbert McShirley on March 12, 1925. She was raised in Sulphur Springs, Indiana and would often remark that there was something special about growing up in a small town. She attended classes at Oxford in Miami, Ohio. Later she met her husband to be James B. Davis of New Castle after he returned from the service in WWII. They were married at her family home, and a few years later their son Sean was born.

She was a partner in the New Castle KFC business for many years and a devoted home maker. Joan loved to attend the yearly Shakespeare Festival in Stratford Ontario. She enjoyed poetry and often wrote her own poems. One poem was devoted to her son Sean that she wrote after he passed away at the age of fifteen. Entertaining her family, friends and neighbors was one of her most favorite things to do. She was an incredible cook and her holiday decorating was breathtaking. Attending the Opera, symphony and IRT on a regular basis was always topped of at the Canterbury Hotel with a good martini.

Her knowledge of the theater was amazing as she could recall every actor, actress, stage settings, music and costumes. She was an avid reader and would have many current event conversations with family and
friends. She loved to travel and once went to England on the S.S. France ocean liner. One of her favorite trips was to Switzerland with her siblings, husband, nephew and in-laws.

She is preceded in death by her husband Jim and beloved son Sean in addition to her parents, her sisters Veune Gratner, Elizabeth Edmundson and brother John McShirley.

In one final martini toast please enjoy a portion of a poem she enjoyed:

Let the light of late afternoon
shine through chinks in the barn, moving
up the bales as the sun moves down.

Let it come, as it will, and don’t
be afraid. God does not leave us
comfortless, so let evening come.

In remembering Joan please consider in lieu of flowers, donations be given to the Henry County Community Foundation or Red Tail Land Conservancy. Her family will have a dinner at a later date to celebrate her life. Funeral arrangements have been entrusted to Hinsey-Brown Funeral Service in New Castle. You may express condolences or share a memory of Joan at www.hinsey-brown.com.