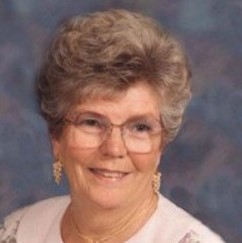 She lived most of her life in New Castle and attended New Castle Schools. Gay retired from Chrysler Corporation on May 31, 2000 after 31 years of service. One of the first women to work on the production floor when she hired in on May 31, 1969, she helped pave the way for other women who wanted or needed to work. She was most proud to work next to her Dad at the Chrysler plant.

She was a life-long member of Foursquare Gospel Church and a member of UAW Local 371. Gay bowled for many years in leagues, with her husband, Paul, as well as women’s leagues, and loved to play Bingo. Her favorite trip was to Hawaii in 2001 with her husband, Paul Ray, celebrating their 50th wedding anniversary. She enjoyed many trips to Florida, Kentucky and Tennessee on Dale Hollow Lake. Being an Elvis Presley fan, she visited Graceland in Memphis, Tennessee in 2016 that was a fulfillment of a lifetime goal. She especially liked sitting in Elvis’ personal booth at The Arcade restaurant in Memphis.

In addition to her husband, Paul Ray, who passed away in 2015, she was preceded in death by her parents and siblings, Jessie Neal, U. G. (Gene) Neal, Wandle “Dude” Neal, Juanita Smith, a great-grandson, Dakota Hibbard and step-great grandchildren, Olivia and Elijah Wright.

A friend to all, Gay, was described by her children as “one of the kindest and most unselfish person to meet.”

Visitation hours will be 11 a.m. to 1 p.m. with the funeral service to follow at 1 p.m. Wednesday, January 6, 2021 at Hinsey-Brown Funeral Service, New Castle with Pastor Danny Douglas officiating. Burial will follow in South Mound Cemetery next to her husband of 64 years. Donations in her memory may be offered to the Henry County Community Foundation, P.O. Box 6006, New Castle, IN 47362 with envelopes at the funeral home or online at www.henrycountycf.org. Due to the new Governor COVID 19 mandates wait times may be longer to enter the funeral home and face mask must be worn. You may leave a condolence or share a memory of Gay at www.hinsey-brown.com