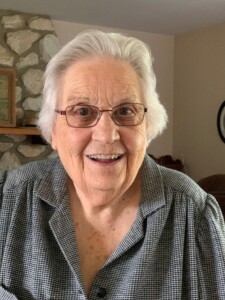 Mary Lea was a self-made organic gardener, environmentalist, cook, and seamstress. She renovated an 1890’s farmhouse where she raised her family and lived from 1958 – 2013.  She believed that children learn through consistent, respectful, trusting adult role models and through inquiry and investigation of the world. As an involved parent, she provided these building blocks for her two daughters and as a Girl Scout Leader, she provided opportunities for numerous children to explore the world and learn skills needed to be productive citizens. Above all else, she believed that education for all is the foundation of our democracy.

Living in New Castle for 88 years, Mary Lea was an avid reader of the Courier Times and donated to the Henry County Community Foundation. Every morning she listened to NPR and every evening watched programs on PBS.

Mary Lea is survived by her daughters, Nancy Apple of Columbus, OH and Peggy Apple of Brownsburg, IN; sister, Martha (Hutson) Michael, New Castle, IN; and nine nieces and nephews.  She was preceded in death by her husband, Richard “Dick” Apple; her parents, Everett & Gertrude (Keesling) Hutson; and brothers, Milton, Marvin, Marlin, and Miron Hutson.

In lieu of flowers, memorial donations may be made to honor the life of Mary Lea Apple to the Henry County Community Foundation www.henrycountycf.org, the Environmental Defense Fund www.edf.org/donate , or to the Clarion University Mary Lea Apple Scholarship https://alumniandfriends.cuf-inc.org/donatenow.

Online condolences can be made by visiting the obituary at www.arnmortuary.com/obituary/Mary-Apple.