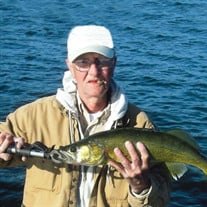 Richard G. Ward, age 81, of New Castle passed away on September 26, 2022, at the Stonebrooke Senior Community. He was born September 22, 194,1 in New Castle, a son of the late Conwell and Florence (Lamberson) Ward. He was a lifelong resident of New Castle. Indiana.

Richard was a 1961 graduate of New Castle Chrysler High School. He married Sylvia on June 8, 1959. He retired from Delco-Remy in Anderson in 1991 after 31years of service. He was then employed by Rose Bowl for 14 years. Richard also volunteered for Habitat for Humanity for many years. He served as the handyman for Wilbur Wright Birthplace and museum. He also served as the Assistant Cub Scout Master Pack 451 at Westwood School when his son was in scouts. He coached the Cub Scout baseball team as well. A member of the Masonic Lodge #91, New Castle, he was also past President of the Henry County Men’s Bowling Association and was inducted into the Henry County Bowling Association Hall of Fame. He also did woodworking. He loved fishing with his brother, children, grandchildren, and great-grandchildren.

In addition to his parents, he was preceded in death by a daughter, Julie, and brothers, Raymond, Jim, Charles and a sister Edna Simmons and his in-laws Sylvan and Naomi Soliday.

Services will be on 2:00 p.m. Friday, September 30, 2022 at Hinsey-Brown Funeral Service in New Castle with Wayman Allen officiating. Visitation will be from 4-7 p.m Thursday, at the funeral home, with Masonic Rites to follow at 7:00 p.m. Memorial contributions may be given to Henry County Community Foundation, Habitat for Humanity or Wilbur Wright Birthplace Preservation Funds. You may share condolences or memories of Richard at www.hinsey-brown.com.

To send flowers or a memorial gift to the family of Richard G. Ward please visit our Sympathy Store.